The “Long Haul” expedition over the frozen surface of the world’s largest, deepest and oldest freshwater lake, the Siberian Lake Baikal, lived up to its name with two participants, Rosie Stancer and Mike Laird, each travelling independently from opposite directions with the record being achieved by the solo unsupported female explorer Rosie.

Rosie Stancer, an experienced polar explorer, desert adventurer, set off in March 2019, from the most southern end, taking in all points of the compass – the most westerly, southerly, northerly and finally easterly points of this vast lake. Her total mileage over 700 km (farther than a straight line between Inverness and London) was completed in a gut-busting 21 days, without resupplies. Whilst Mike Laird, also a seasoned expeditioner from Edinburgh, set off from the northern end of the lake travelling south in the opposite direction to Rosie. Both Mike and Rosie were totally self-reliant and faced temperatures that swung from balmy -10c to -20cs plus windchill from vicious Siberian winds, no maths genius required to hit the -40s.

Rosie and Mike travelled almost a marathon per day for 20 consecutive days whilst pulling sledges that weighed upwards of 60 kilos. They both man-hauled and travelled on skis or with spiked boots across the ice, encountering fierce and unpredictable Siberian winds, hugely variable ice from pressure ridges and drift, to open water, with even an earthquake thrown into the mix. The route was a World First across the lake in support of Veterans Aid their chosen charity.

Mike broke through thin ice to his shoulders twice, and completed his journey from the north, travelling to the east and then south without hot food or hot water, his stove pump having irretrievably broken early on at the onset. Both suffered minor-cold related injuries, although Stancer said she was happy to have “kept her remaining toes and even happier to have escaped Brexit for a month” and Mike said, “I’m delighted that we’ve both done this, and bagged a record for Great Britain and made it safely back!”

Laird and Stancer also undertook psychological research throughout the duration of their challenges.

CEO of Veterans Aid Dr Hugh Milroy said: “No-one has ever gone to such extreme lengths to support our Charity and we are awed by what they have achieved. Rosie has been a long-time supporter of VA and we were thrilled when she told us about this latest venture and introduced us to Mike.

VA has a national and international footprint, but we never expected to see it advertised in the frozen landscape of Eastern Russia – or as part of a record-breaking expedition. These two extraordinary people set themselves an awesome challenge. The money they have raised – and are still raising – will help us to save lives, as well as putting us on the map in such a spectacular way and we are hugely grateful to them.

These two extraordinary people have set themselves an awesome challenge – and were committed to it before fundraising was even mentioned; knowing that it will fund some of our work, as well as putting us on the map in such a spectacular way, is just the icing on the cake!”

VA provides immediate, practical support to ex-servicemen and women in crisis – regardless of age, ethnicity, rank gender or length of service. All money raised by supporting The Long Haul will go towards something vital and unique. It will fund Veterans Aid’s emergency interventions – the immediate actions that prevent ex-servicemen and women in crisis ending up homeless or facing the prospect and consequences of homelessness.

Rosie and Mike ‘flew the flag’ for Veterans Aid and made it a fundraiser for a charity that we both admire.

PREPARATION INTERVIEW – SEE YOU ON THE ICE …

“See you on the ice” will take on a whole new meaning for Rosie and Mike Laird when they meet at the half-way point of The Long Haul – their 725km walk across frozen Lake Baikal. The ‘double solo’ duo will have battled extreme cold, wind, ice, possibly the odd bear, ice fracturing and stretches of ice boulders where rivers enter the lake.

And when they meet?

“We will share a cup of tea, take some photos and exchange information about the routes we have covered so the other knows what to expect.
If we meet late afternoon, we will set up tents next to each other for a night” – says Mike

The biggest physical obstacles will be open leads of water as the pair are not taking immersion suits. Means of navigating across or around any open leads will require some resolve and pluck. There will be some stretches of ice boulders where rivers enter the lake. The bigger the river- the bigger the ice boulders and the pair have to either go around or over. Both present challenges which Mike and I will only become aware of if/when we face them.

“We have the kit and the know-how. Fingers crossed!” – says Mike.

The expedition itself will be about long distance walking and skiing in extremely cold temperatures, pulling a sled. Mike has trained by doing several 30km walks and undertaking a 24 hour non-stop walk from the east coast to the west coast of Scotland.

“My training is also involving a chiropractor who is correcting a few bodily niggles and getting me to stretch way more than I usually do!” – says Mike.

Back in the opposite end of the UK, deep in Somerset, Rosie has been pulling tyres, yomping the hills with a weighted rucksack, getting periodic beastings from her trainer Lee Watts, of LWFitness4All an ex-para who served in Afghanistan, and fiddling around with some hefty weights to power her up, hone some survival skills and throw on some weight herself – “To enable me to pull my own weight – in every respect!”

Rosie and Mike will be able to communicate with each other and with their expedition coordinator and advisor using satellite phones. A protocol has been drawn up and agreed. They have prepared for emergencies by carrying Garmin Inreach as well as flares. Both will navigate using compass, sun, wind and good old fashioned maps. GPS will be used for logging purposes.

“We drew up a list of the most significant risks (e.g. breaking a limb, total immersion in water, loss of critical equipment) and feel able to deal with most eventualities. We have also formulated an extraction plan either by helicopter or hovercraft (depending on our position and situation) which would be managed by our Russian colleague” – says Mike.

“All and any risks taken, if unavoidable, will be calculated, no cavalier antics. We will both abide by the Shackleton rule of ‘survival first’.”– says Rosie.

The hazards of the Siberian expedition were different from those of the polar ice. So I was a new girl on the starting (ice) blocks yet again. Freshwater ice behaves differently to that of the sea ice – not being salty, it has none of the viscosity of the arctic ice. So, where on the arctic you can, with care and on skis, travel over perilously thin new ice where it literally bends beneath you (I call it ‘rubber ice’) and its viscosity, providing it is unbroken, will hold it together beneath you like a trampoline surface, but freshwater ice will beckon you on but buckle, break and shatter beneath you. Like crashing through a sheet of thin glass.

It is also different to read. One learns the language of polar ice, it’s hell’s own melody of different groans, moans, sighs and screeches mean different things but the sounds of freshwater ice is that of the sirens, beguiling and misleading. It is hard to differentiate between the ‘happy noises’ and amber/red alert alarms.

And those winds, come up without warning at the dropping of a mit and scythe straight through you.

And yet and yet, I became enchanted and fell in love with the lake and with the Siberians. It felt like an old friend and she looked after me despite my foolish new girl ways. 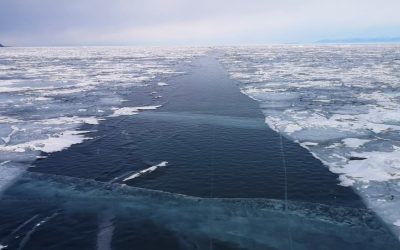 Well guess where I am … having reached the Northern point of Lake Baikal the frozen lake in Siberia, I pause to take in the view "At my most northerly point on Lake Baikal with the extraordinary monument and inscription. Me and my trusty sled Big Fat Bertha, adorned... 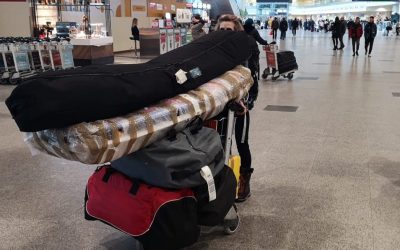 Heading on our way to start our Long Haul Expedition on the frozen Lake Baikal. Two small sledges and a baggage trolly full of kit will follow Mike Laird and Rosie Stancer across Russia to Irkutsk near to the starting points of their double Solo haul along Lake...

Extreme support for the charity Veterans Aid crossing Lake Baikal in Siberia THE LONG HAUL Rosie and Mike Laird announce their planned expedition to walk and ski 725k across frozen Lake Baikal in Eastern Russia – to set a new record and in support of UK ex-service... 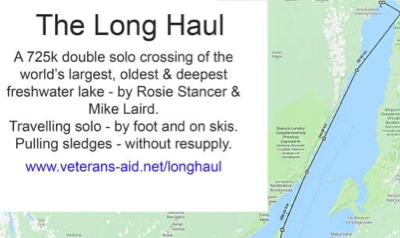 Route of The Long Haul

An interview with Mike Laird & Rosie Stancer who will travel the length of Lake Baikal This expedition is in support of Veterans Aid and in an interview with Dr Hugh Milroy CEO of the charity Mike Laird explained “This route takes in the most southerly, westerly,... 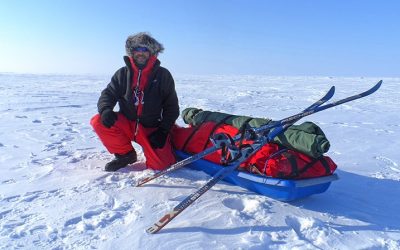 See You on the Ice

Mike Laird - joins Rosie Stancer on their Long Haul Expedition - Double Solo Duo “See you on the ice” will take on a whole new meaning for Mike Laird (pictured above) and I when we meet at the half-way point of The Long Haul – the 725km walk across frozen Lake Baikal....