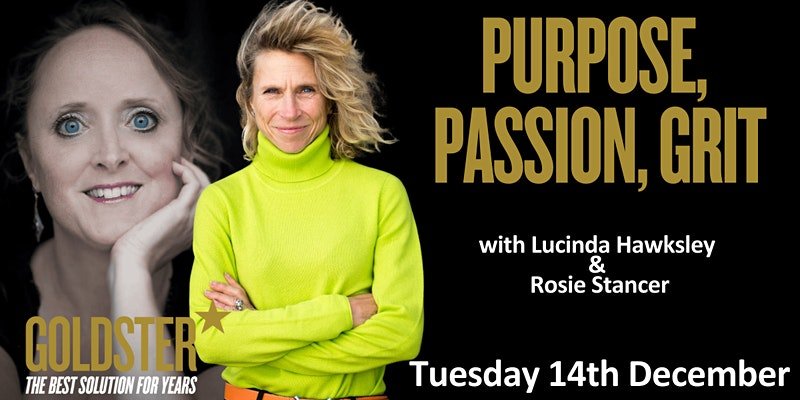 On 14 December, at 12pm, Goldster is launching an exciting new venture: PPG, which stands for Purpose, Passion and Grit, a new set of online talks with club presenters Lucinda and Humphrey Hawksley.

“PPG focuses on the missing ingredient – that urge inside every individual to make something of their own lives – and our first guest is a truly remarkable woman.

Rosie Stancer describes herself as “an unlikely species”: a female explorer, but a petite one, who is married, a mother and at 61 years still continues the long history of her extreme expeditions. She has undertaken a series of polar expeditions of increasing severity, including solo expeditions to both South and North Geographic Poles, and has man-hauled 600km over the frozen Siberian Lake Baikal. Her compass has also swung to non-frozen deserts, such as leading a group through the length and breadth of the Wahiba Sands in Oman, and most recently crossing the breadth of the world’s newest desert and environmental disaster, the Aral Kum. On each of her expeditions, Rosie undertakes research – meteorological, environmental and physiological – and she has received awards and accolades in honour of her incredible work.

Despite being old enough to know better, the only ambition Rosie is lacking is a desire to retire, making her the perfect Goldster guest.”

Join Lucinda Hawksley at midday on 14 December, as she talks to Rosie about her plans to adapt, modify and continue with her expedition ambitions, and about her need to share her legacy of discovery and adventure and to focus global attention on crucial environmental issues.