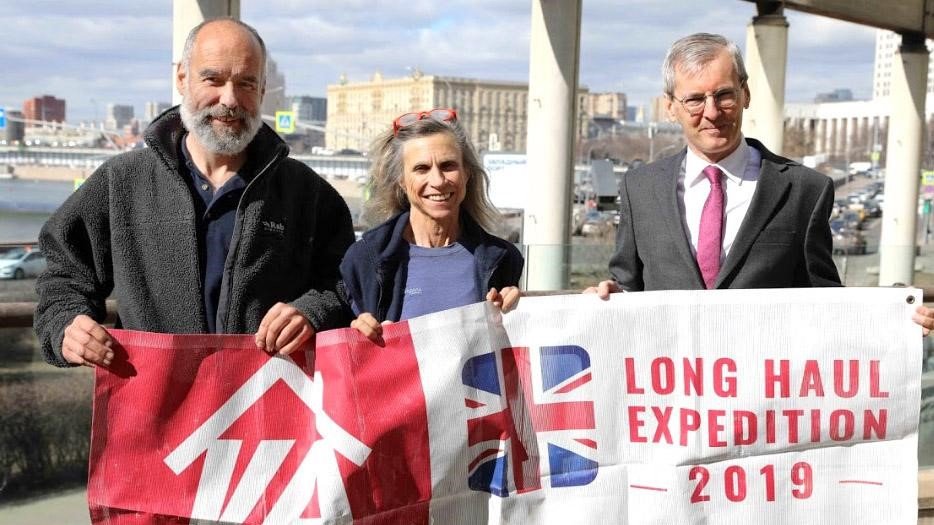 The “Long Haul” expedition over the frozen surface of the world’s largest, deepest and oldest fresh water lake, the Siberian Lake Baikal, lived up to it’s name with the two participants, Rosie Stancer and Mike Laird, each travelling independently from opposite directions with the record being achieved by the solo unsupported female explorer Rosie. Rosie Stancer, an experienced polar explorer, dessert adventurer and cousin of The Queen, set off from the most southern end, taking in all points of the compass – the most westerly, southerly, northerly and finally easterly points of this vast lake. Her total mileage over 700 km was completed in 21 days, without resupplies. Whilst Mike Laird, also a seasoned expeditioner from Edinburgh, set off from the northern end of the lake travelling south in the opposite direction to Rosie. Both Rosie and Mike man-hauled and travelled on skis or with spiked boots across the ice, encountering fierce and unpredictable Siberian winds, hugely variable ice from pressure ridges and drift, to open water, with even an earthquake thrown into the mix. Mike broke through thin ice to his shoulders twice, and completed his journey from north, travelling to the east and then south without hot food or hot water, his stove pump having irretrievably broken early on at the onset. Both suffered minor-cold related injuries, although Stancer said she was happy to have ‘kept her remaining toes, and even happier to have escaped Brexit for a month’ and Mike said “I’m delighted that we’ve both done this, and bagged a record for Great Britain and made it safely back!’ Laird and Stancer undertook psychological research throughout the duration of their challenges. Funds were raised, and continue to be so, for the Charity Veterans Aid. CEO of Veterans Aid Dr Hugh Milroy said: “No-one has ever gone to such extreme lengths to support our Charity and we are awed by what they have achieved. Rosie has been a long-time supporter of VA and we were thrilled when she told us about this latest venture and introduced us to Mike. VA has a national and international footprint, but we never expected to see it advertised in the frozen landscape of Eastern Russia – or as part of a record-breaking expedition. These two extraordinary people set themselves an awesome challenge. The money they have raised – and are still raising – will help us to save lives, as well as putting us on the map in such a spectacular way and we are hugely grateful to them. “
This website uses cookies to improve your experience. We'll assume you're ok with this, but you can opt-out if you wish. Cookie settingsACCEPT
Privacy & Cookies Policy