Route of The Long Haul 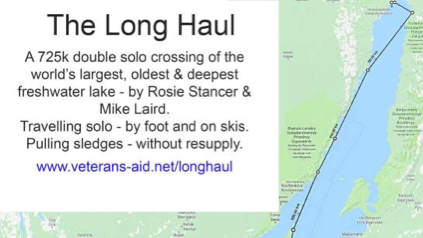 This expedition is in support of Veterans Aid and in an interview with Dr Hugh Milroy CEO of the charity Mike Laird explained “This route takes in the most southerly, westerly, easterly and northern points of Lake Baikal. While the lake has been skied, these four points have never been touched by one expedition.” Rosie adds: “The length of the lake is 636k but taking in all four points brings our anticipated mileage up to 725k.”

The crossing will be a ‘World First’ as a solo woman. It came about when Mike asked Rosie to join him as part of a team that that he was hoping to assemble. Mike said: “In true Rosie style she said that she loved the concept – but that to do it as a team was possibly not challenging enough for her. So, she hatched the idea of doing a ‘Double Solo’. The rest has been an evolution of joint input and thought. It’s important because it will be a World First brought back to Great Britain. Also, it will see both a man and a woman taking on roughly the same challenge but in isolation from each other. We shall be doing some psychological studies along the way to see how we both cope and what our feelings were along the way.”

Rosie added: “This promises to be a remarkable journey not just physically, but psychologically and spiritually too. It’s important to both Mike and I that, whatever challenge we undertake, we must forge a legacy of good from it – in this case both Veterans Aid, which holds a special significance for both of us, and the research, which I have always held a passion for and conducted on all expeditions. We know not what we might learn until we’re out there, and sharing the experience on our return will be part of the expedition legacy. I anticipate some extremely testing times but the responsibility of fulfilling the challenge to help Veterans Aid will propel us on.”

Mike, whose involvement with VA is more recent, is not a veteran but has worked as an embedded photographer in Afghanistan and has immense respect for Britain’s Armed Forces. He said: “I have long had incredible admiration and respect for what our servicemen and women do to protect our country and its interests. Having seen first-hand how they operate in the most challenging conditions and situations makes me proud to be undertaking this challenge and to be associated with Veterans Aid.” Conditions will be extreme – the pair expect temperatures of -20°C, plus strong winds and occasional white outs, but on February 6th Mike checked the weather at his departure point: It was -51°C – and sinking! If all goes well, the pair will arrive back in the UK on 27th March.